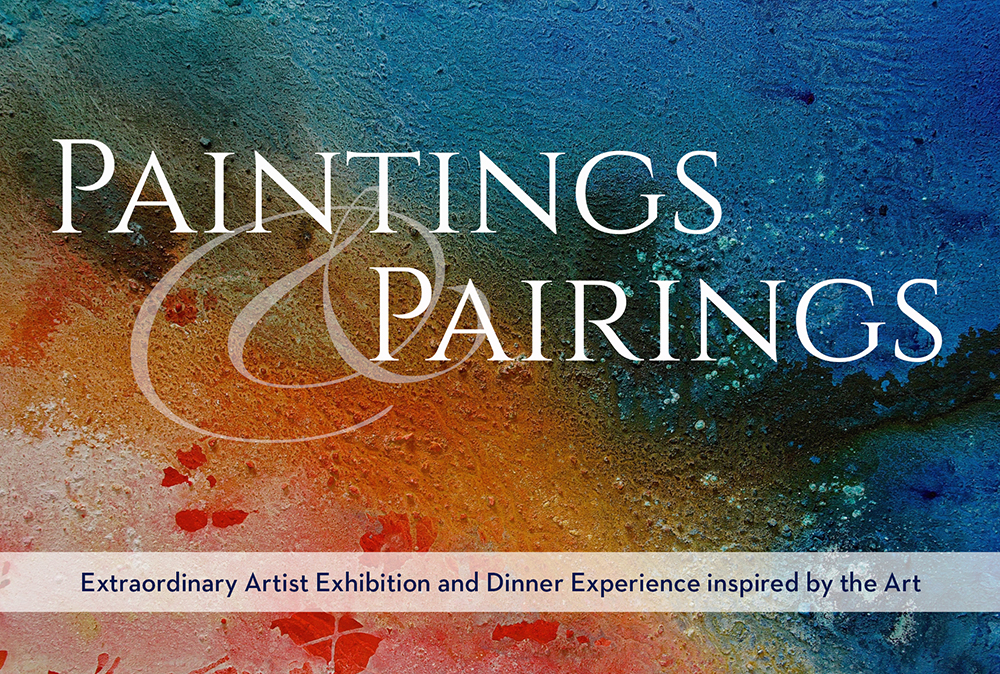 Art appraiser, advisor and curator Lily Yu is combining her love of art with her appreciation of food and wine for “Paintings and Pairings,” a series of dinners featuring the works of a local artist combined with a downtown chef’s cuisine and a Monterey County winery. Yu said she plans to hold the dinners at different locations around the Peninsula.

The inaugural event will be a collaboration between paint- er Paul Seftel and chef/owner Soerke Peters at the Village Corner, located at Dolores and Sixth, Sept. 5 from 5 to 9 p.m.

The evening will begin with wine and light bites during an opening reception for “Arts Techtonic, Forces of Nature by Paul Seftel,” including works on canvas and paper, and four outdoor wall reliefs. Born in London, Seftel is an abstract mixed-media painter, using metal, minerals and raw pigment in his works. While his studio is at the American Tin Can- nery in Paci c Grove, his work will hang at the Village Corner through Dec. 2.

“I chose Chef Soerke and Paul Seftel because they are both innovators in their realms who are inspired by nature and Earth,” she said. “Chef Soerke’s emphasis on food is on freshness, local ingredients and seasonality. Artist Seftel uses all organic materials to make his homemade paint, such as natural minerals, pure pigments and pulverized stone.”

While he is keeping the menu a secret, Peters said, “It will be abstract cooking, if there is such a thing.”

“As chefs, we love to be challenged with new ideas, con- cepts and opportunities,” he said, and Yu’s mission for Paintings and Pairings “is very interesting and challenging, indeed.”

“Thinking of Paul’s interpretations from canvas to sculp- tures and putting it on a plate is no easy task,” Peters said. “Getting to know the artist personally does help inspire me to use similar techniques in the art of plating.”

Each of the four courses will be paired with wines from Albatross Ridge.

Yu said that throughout the dinner, which is set to start at 7 p.m., Seftel will talk about his work and how he creates it, and Peters will discuss what inspires him in the kitchen. Each guest will receive a copy of the evening’s menu signed by the Seftel and Peters to mark the occasion.

“I am not sure what will happen at the dinner. This pairing of artist and chef has never been done before,” she said. “This is for people hungry for adventure and who have appetites for fresh ideas and organic inspiration.”

Each seat costs $95, including tax and tip.

Be the first to know about our next event. Sign up below. After his three year apprenticeship in Wilhelmshaven/ Germany, he moved to Munich and worked at world-class hotels and restaurants including a one and three Michelin Star rated restaurant. He went to Bavaria Hotel Training Schoolwhere he became a certified Hotel Receptionist, Apprenticeship Instructor, and Bartender.

Chef Peters’ passion for Farm to Table and being sustainably responsible made Basil the first Certified Green Restaurant in the Monterey County. He is also active in the American Culinary Federation Monterey Bay Chapter as Chair of the Green &amp; Sustainable Committee and President. He serves as Vice Chair of the Carmel Chamber of Commerce. Living across the US for the last 25 years – Artist Paul Seftel is originally from London has been living and working on the California coast in Monterey County for 3 years, Paul was in NYC for nearly a decade, creating, exhibiting and running studios and project spaces in Brooklyn and Manhattan. Paul also spent many years living in Colorado, in both Denver and Vail. He did some time in LA and in New Mexico too, after studying Art at school in London and University in Edinburgh, Scotland.

Inspired from his migrations across the world through cities and suburbs, to deserts, mountains, islands, and coast, his works are a journey and map of experience. Primarily working with light, color and texture in painting, Seftel has also created many custom interiors, written a couple of books, and worked with film video art and production. His original works are in private collections of world renowned musicians, fashion industry leads, real estate moguls, lawyers, tech entrepreneurs and financial investment experts.

Seftel creates his own paint mixtures with stone and metal minerals and raw pigments. Transformative blue green and turquoise hues are achieved with oxidation of copper pigment, iron oxides and rusts, and limestone mixed with ingredients like marble dust, mica, quartz and polymer are used to create cured stone and metal painted surfaces. These formulas go back the origin of fresco and painting, from the pyramids in Egypt to ancient Rome, these traditional methods are combined with modern materials and organic abstract painting techniques to create archival works of art. Going much deeper than surface though, the works are intended to evoke memories of dreams, emotions and spiritual experience within the viewer.

Capturing our changing landscape of time and consciousness, seeing close up and at a great distance offers a new perspective. Stories of our world are buried within these mineral paintings. The works tell unspoken tales of the heart, the human journey and our relationship to the forces of nature that have carved and forged our world. The works capture the essence of the artist’s intrigue and study of ancient civilizations, spiritual ceremony, native mythology and prophecy, along with observation of environmental changes, mineral mining, oceans rising, space exploration, fuse together the ancient past, present and future in a language of color and texture.