Got a picture you don’t know about? She’ll figure it out.

Home/About Agent Art, Press/Got a picture you don’t know about? She’ll figure it out.

Got a picture you don’t know about? She’ll figure it out. 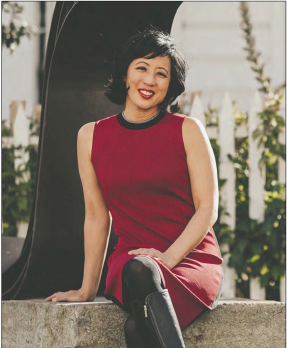 All her life, Lily Yu has loved art. She comes from a family of creative women, including her mother, aunts and sisters, and has been drawing and painting since she was 6. Her other great loves are food and wine, so when she was ready for a change from her life in her native Los Angeles, a move here – where she had visited on vacation – seemed like a natural choice. Schooled at UCLA and Cal State Long Beach in fine arts and art history, Yu put herself through college with a catering business she started at 18 in her mother’s kitchen. She would later run two restaurant/gallery combinations, places where bohemian types could come and play music or do poetry read­ings.

For 13 years, she worked as the director of the Andrew Weiss Gallery in Beverly Hills, where she said her real-world education took place. “I handled works by 20th century masters, like Matisse, Chagall and Picasso,” she explained, developing a knack for recognizing fake works from dealing with the real ones. “There are things that just don’t feel right ” about the frauds, she said.

When corporate CEOs wanted to assemble art collections that would represent who they were personally, living on after they’d died, Yu was there to help them. But after a while, she wanted to indulge her own creativity and become more inde­pendent. She found Carmel to be “charming and intriguing,” infused with the artistic spirit she sought.

When Yu got here, although she found the town “very wel­coming,” she couldn’t find the space she’d hoped for to open a multi-artist gallery, and she discovered that the long-time residents had already assembled their own art collections, so those services weren’t required, either. Instead, she became a sort of art-world private eye, running down the provenance of works people had, but didn’t know anything about. Her business, appropriately, is named Agent Art. “Everyone has something somewhere and they don’t know what it is,” she said. “Maybe their late uncle left it to them.” She specializes in 20th century and contemporary Ameri­can, European and Asian art, including photographs. “I recently took a case that seemed impossible,” she said. “A typical appraisal takes one month. This one took several.” It was an unsigned drawing by an artist from pre-World-War­n Dresden, and the way she was able finally to run its origins down was by the distinctive way the artist wrote the numbers in the date on the piece.

She also does appraisals and helps people decide what works to buy, based on value and market research. Another passion for Yu is bringing people together for good causes. While in Beverly Hills, she was able to assemble more than 300 nonprofits to raise more than $1 million for charity. In this community, she hopes to combine her love of food and wine and art to curate exhibits at local cafes, starting with the Village Corner and the Shale Canyon tasting room. “The Shale Canyon show will be a pop art show, reflecting the playful nature of the wine and the owner,” she said. Coordinating with the Vil­lage Corner, she hopes to have a series of dinners and exhibi­tions she’s calling “The Artist’s Table,” where artists and chefs will be on-hand to discuss the work and how it inspires the food.

In the area for five years, Yu lives near Stevenson School, and has embraced the spirit of the town. “I love the burgeon­ing renaissance of culture, the innovations in food, the musical scene, the Center for Photographic Art … ” and the list went on.

She hopes to be able to become part of the fabric of the town’s art scene, bringing it together, and adding her own con­tributions to her newfound bohemian village.